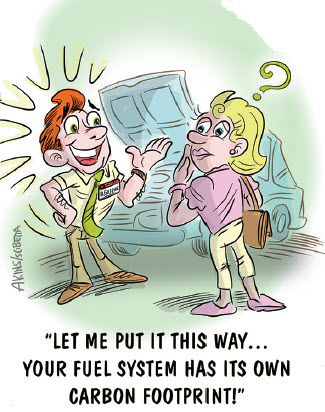 Gasoline Direct Injection comes with a new set of challenges and service opportunities that the technician must be familiar with.

Many of today’s vehicles are fitted with a relatively new fuel system technology for the automobile, referred to as Gasoline Direct Injection (GDI). While this technology has been around for 100 years, it has just become widely used by the automotive industry in gas applications. The GDI system offers a great improvement in power, torque and fuel economy. While some lean-burn engines operate on air-fuel ratios of 20:1, the GDI systems may approach ratios in the range of 65:1 during light throttle conditions. With this system, fuel is injected directly into the combustion chambers at pressures that can exceed 2000 psi. GDI allows a smaller displacement engine to perform like a larger one, especially those equipped with a turbocharger while achieving good performance, better fuel efficiency, and lower emission output. And with this new technology comes a new set of challenges in the form of carbon build-up on the intake valves.

Drivability issues concerning excessive carbon usually come in the form of surging, stalling, hard starts, odd fuel trim numbers, misfire codes stored in memory, etc. The carbon deposits can create turbulence with the air-fuel mixture in the combustion chamber, causing hot spots due to uneven fuel distribution and
improper burning of the gases. Another major concern is decarbonizing an engine with heavy deposits. Chunks of carbon can dislodge, resulting in damage to pistons, rods, valves, and cylinder walls. Annual cleaning may prevent the accumulation of heavy carbon deposits, and this will be discussed later in the article.

Unburned fuel and oil vapors are drawn back into the intake manifold via the positive crankcase ventilation valve (PCV) to be consumed in the combustion process. The intake valves become coated with these chemicals. Intake valve guide and seal seepage further complicate these concerns, as the oil is baked onto the intake valves. This is especially a problem with higher mileage engines and the wear factor, which promotes oil consumption and blow-by. Exhaust gas recirculation (EGR) is another source of contamination.

Carbon build-up is common with this fuel injection arrangement, as the fuel is injected directly into the combustion chambers, bypassing the intake valves. This injection arrangement eliminates the benefit of fuel wash on the valves, which has a cleaning effect, such as that with a typical port fuel injection. The detergents added to the fuel, or supplements added to the fuel tank to clean the injectors, never come in contact with the intake valves on the GDI system. Fuel quality is a major issue in minimizing carbon formation, and that is why the vehicle manufacturers recommend the use of Top Tier fuels. Some vehicle manufacturers have introduced software updates, which make adjustments to the ignition spark and valve timing in an effort to control the formation of carbon deposits on the intake valves.

Extended oil drain intervals are becoming a concern, especially when incorrect lubricants are being installed when performing a lube service. Camshaft driven high-pressure fuel pumps are encountering accelerated camshaft wear due to improper lubricants and oil viscosities. Lower viscosity lubricants such as 5W20 or 0W20 are necessary for certain engines, such as those fitted with variable valve timing and active fuel management. Follow the vehicle manufacturer’s recommendation when selecting the lubricant. The use of conventional motor oil in an engine requiring synthetic oil can contribute to carbon build-up and the failure of some major engine components.

Getting the vehicle on an annual intake cleaning schedule may save the customer a lot of money in repairs. If an engine is allowed to accumulate heavy carbon deposits, pulling the intake and blasting the valves with walnut shells may be the only solution. This form of cleaning often exceeds $1200. Cleaning the intake with chemicals introduced via a vacuum source can prevent the formation of major carbon deposits that can dislodge, resulting in major engine damage. Performing this service annually or every 15K miles can help prevent the formation of these carbon deposits. Ask your Mighty Rep for a demonstration.