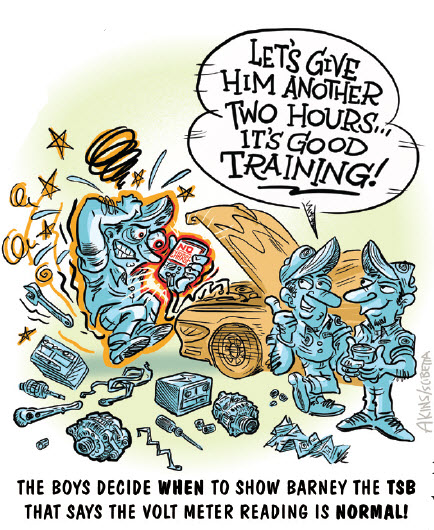 The technician was challenged with two vehicles with major electrical concerns. Late in the diagnosis, it would be determined that both vehicles were functioning as designed.

The first vehicle involved a 2013 Ford F150 with no power to several electrical systems/devices. The failed systems included: No A/C fan action; the audio system, navigation, heated and cooled seats, heated steering wheel, and rear defrost were all non-functional. Late in the diagnosis, it was determined that the system was functioning as it was designed, as it was responding to a discharged battery. The failed electrical circuits were the result of load-shedding (dropping electrical circuits) to maintain the battery capacity at a determined level, which is a function of the Battery Management System (BMS). Several Ford applications (cars and trucks) are equipped with the BMS, which is designed to monitor the condition of the battery and take action to preserve and extend the life of the battery. If the vehicle is equipped with the system, the positive battery cable will contain a generator current sensor and the negative cable will be fitted with a battery current sensor.

To restore the electrical circuits once the battery has been charged or replaced following a discharge condition, it will be necessary for the BMS to sleep for 8 hours with the key in the off position and the doors must remain closed. During this time the BMS will relearn the battery state of charge and the electrical systems will recover to their normal operation. If the 8-hour sleep-time is not an option, the BMS can be reset with a scan tool or reset device available from tool suppliers such as OTC or Midtronics. Many vehicles are equipped with a similar system designed to automatically adjust the charge rate of the alternator based on the age and sulfation of the battery. When a new battery is installed it must be registered with the system to prevent the new battery from being overcharged.

The 2007 Avalanche was a recent purchase. The customer noticed a variance in the voltage reading displayed in the instrument cluster. At times the meter reflected 14 volts and then would display a 12-volt reading. Certain it was the alternator; he had a local rebuilder refurbish the alternator, installing all-new components. When the condition persisted, a second alternator and a battery were installed in a futile effort to stabilize the voltage reading. The system was performing the way it was designed. Starting in 2005 GM introduced a Regulated Voltage Control System (RVC) on certain vehicles such as light-duty and full-size pickups and SUVs. The RVC system controls the alternator output based on the electrical demands of the system. During periods of low electrical demand, the voltmeter may reflect 12 volts and up to 15 volts during peak electrical demand. The purpose of the system is to increase battery life by preventing overcharging and improving fuel economy. Two different systems are used:

Summary: Identify the system before you condemn the system. Today’s technology will change our approach to electrical and charging system diagnostics. Most important of all, make battery inspections/testing a part of your routine maintenance.