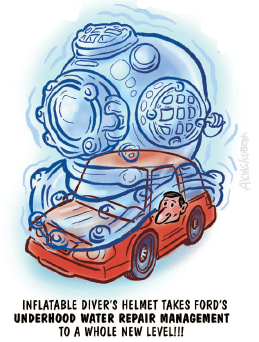 Distorted and Damaged Air Filters: The Condition May Be Water Induced

While performing a routine lube service on a 2015 Ford Transit, the lube service technician identified a severely damaged air filter. The filter was distorted and damaged to the point that foreign debris could be drawn into the engine, in addition to fragments of the filter media, which could result in major damage. The technician assumed it was a defective filter, replaced it, and sent the customer on their way.

Weeks later and from a different shop, a second filter complaint comes in involving a like vehicle. This time performance issues were of concern, with multiple trouble codes stored in memory. When performing the diagnosis, the same filter distortion and damage was present, accompanied by water pooled in the airbox. The presence of water in the second vehicle’s airbox was a key factor in identifying the cause of the filter failures. Read on for a thorough description of the symptoms and the recommended modifications provided by the vehicle manufacturer.

Air filters subjected to water from rain, floods, ice, or snow can create a hydro-lock condition, which restricts the airflow through the filter media. This condition creates the same symptoms as a filter heavily contaminated with debris. The engine may stall; the airbox can become distorted or totally collapse. Often, the filter gets sucked into the airbox, allowing unfiltered air to be drawn into the engine. Filters heavily contaminated with water often disintegrate and are consumed by the engine and turbocharger, if equipped, resulting in some costly mechanical damage.

Snow impaction on the filter media can be the most difficult condition to troubleshoot, as it can be elusive. By the time we get the vehicle in the shop for a diagnosis, the snow or ice has melted and the water has evaporated, thereby losing all traces of evidence. Some vehicle manufacturers offer accessories such as winter grille covers, snow deflectors, or foam secondary filters to prevent snow or water entry. A filter subjected to water, snow, or ice should be replaced, as permanent damage is likely.

Ford Transits with damaged air filters may be due to water contamination, promoting a series of engine performance symptoms including a starting difficulty, misfires, damaged air filters, and a series of stored trouble codes. Vehicles affected include the 2015 Ford Transits built at the Kansas City, Missouri, assembly plant between January 17, 2014, and March 30, 2015. Insufficient sealing of the engine compartment allows water to make contact with some powertrain components and the air filter. Ford introduced a Customer Satisfaction Program involving the following: 1) Installation of a foam seal (Ford #CK4Z-61021A46-A) along the backside of the cowl panel grille. 2) Removing and discarding the drain hose from the passenger side of the cowl panel grille. 3) Removing the necessary ducts and components to gain access to and remove the air filter cover. 4) Inspect the air filter for the presence of water contamination. 5) Removing these components will provide access to a body joint between the right inner-fender and cowl, requiring a mastic patch (Ford #4L3Z18203A16-AA) to seal the seam. 6) Ford supplies a water diverter panel (Ford #CK4Z-6102408-AA) for the right side of the vehicle. The mentioned components and the installation procedures can be viewed on TSB 17-0014.

Inspect the air filter for evidence of water. A filter saturated with water must be replaced. Our experience with water-contaminated filters has been…if water or moisture is present on the filter media, the filter should be replaced. If not, a hydro-lock condition can occur and the filter will be damaged, distorted or pulled from the air box, which can result in major damage. The cost of replacing an air filter is a minor investment when compared to the mechanical damage that can be incurred.

Water contamination is seldom considered. Air intake and air filter housing locations can easily contribute to water entry and hydro-lock conditions. Many vehicle manufacturers have changed the position of the air ducts that route the incoming air to resolve these issues.