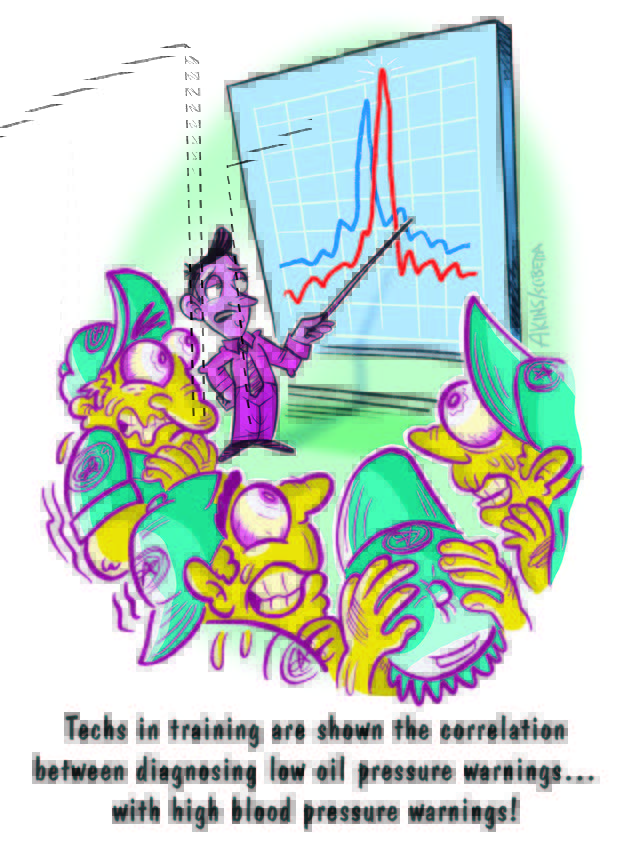 Low Oil Pressure Warning: A System Clean-Up May Be the Cure

His quiet morning drive to work in his 2013 Silverado was interrupted by chimes and a Stop Engine Low Oil Pressure Warning. That can be a scary event, as major engine damage can result due to lack of lubrication. These symptoms have become a common occurrence for GM vehicles equipped with Active Fuel Management.

When these symptoms occur, the oil pressure sensor and a small filter screen located beneath the sensor are usually the first consideration. The purpose of the filter screen is to prevent contaminants from collecting in the valve lifter oil manifold and its related solenoids. When the screen is restricted, it obstructs oil flow to the oil pressure sensor. Often, the replacement of these components resolves the low oil pressure symptoms. When they fail to correct the symptom, further diagnostics will be necessary. At this point the next procedure usually involves the replacement of the oil pump, as issues involving sticking pressure regulating valves have become common with the GM applications. There is a second pressure regulating valve located in the oil pan that many are not aware of. If this valve sticks open, a low pressure condition at the oil pressure sensor will occur, setting off the warnings and the low pressure reading on the oil pressure gauge.

Making an Accurate Diagnosis
Explore other considerations prior to replacing the oil pump, as this can be labor intensive. Imagine recommending an oil pump replacement on a Silverado 4×4 with a 5.3L engine and the new pump failing to correct the low oil pressure symptom. In this process the oil pan must be removed to gain access to the bolt that attaches the pickup tube to the oil pump. This involves removing skid plates, the front differential carrier, unbolting the steering rack, removing the transmission cover bolts and cover and a crossbar. The oil pump replacement calls for a labor rate of 8.5 hours, plus parts. You had better be correct in your diagnosis, as it would be difficult to explain why this costly service failed to correct the symptoms.

Silverado in question: With the engine idling in the shop, we observed an oil pressure reading on the dash gauge of 40psi. Three minutes into the run time the gauge started a steady drop to near zero oil pressure. Shutting the engine down for a few minutes and then restarting resulted in a repeat of the mentioned dropping oil pressure symptom.

With the oil pressure gauges in place, the engine was started and both gauges reflected 55psi. Three minutes into the run time the pressure gauge at the oil filter location remained steady at 55psi while the gauge at the oil pressure sensor location began to drop to a pressure reading of 6psi. That reading was low enough to sound the chime to indicate a Stop Engine Low Oil Pressure Warning. Considering that the filter screen beneath the oil pressure sensor had been previously removed, the drop in pressure was due to the pressure regulating valve for the AFM system (located in the oil pan) being stuck in the open position.

Clean-Up
On a hunch, we performed an oil and filter change and installed an additive to remove sludge, varnish and gum deposits from the engine components. Once completed, we started the engine and observed both gauges with much anticipation. Thirty minutes later we were convinced the cleanup had freed the stuck AFM valve in the oil pan as both gauges remained steady at 55psi. Obviously, we would not have taken this approach if the lower gauge (at the oil filter) had reflected the 6psi reading. This would have indicated a stuck pressure regulating valve in the oil pump, requiring an oil pump replacement. For additional information concerning pressure readings involving the oil pump and AFM regulating valves, refer to OTL ACTIVE FUEL MANAGEMENT… Diagnosing Low Oil Pressure Symptoms.

Timely maintenance is imperative in keeping the engine free of contaminants.