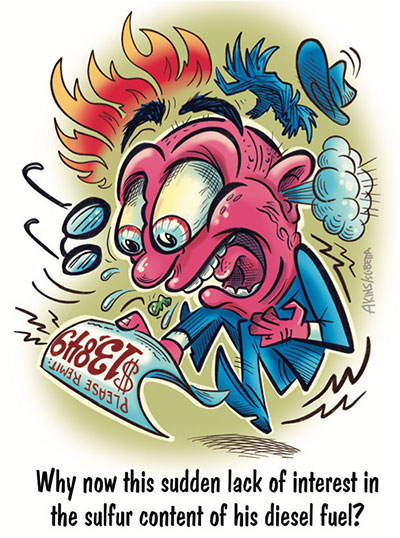 The shop had performed a service on the customer’s 2015 Silverado equipped with a 6.6L Duramax Turbo Diesel, which included a fuel filter replacement. Weeks later the customer contacts the shop owner requesting re- imbursement in the amount of $14,000 to cover the repair cost of the fuel injection system due to an alleged defective fuel filter. The system had been flooded with contaminants and the customer had been convinced it was the fault of the fuel filter.

Mechanic A says…A defective fuel filter is the reason for the failed injectors and injector pump. Mechanic B says…The damage to the system is due to low sulfur diesel fuel and the lack of fuel lubricity for the injector pump. Read on and you make your own deter- mination as to which mechanic (A or B) has made the correct diagnosis.

The vehicle in question was fitted with a Bosch CP4 injector pump. Reports indicate that this style pump was not designed to operate on diesel fuel produced in the US. The low sulfur fuel produced in the US does not provide sufficient lubrication to protect the system. The reduction of sulfur in the fuel from 500 PPM to 15 PPM (parts per million) has created some major and very expensive challenges.

To comply with stringent emission standards the reduction in the sulfur content of the fuel was mandated. The refining process by which this is achieved can alter the lubricating properties in the fuel, affecting the lubricity of the fuel. Some diesel owners rely on chemical additives to improve the lu- bricity of the fuel to help protect the metal components. Lubricity is a measure of the fuel’s ability to provide lubrication sufficient to prevent premature wear of the fuel system com- ponents and moving parts within the injector pump. Degra- dation within the system can result in premature wear and metal particles being dispersed throughout the fuel system, resulting in a catastrophic failure and costly repairs. Flushing the system is not the solution. The entire fuel system, in- cluding the injector pump, fuel injectors, high-pressure and return fuel lines must be replaced. In addition, the fuel filter housing and the fuel tank must be cleaned to prevent a recurrence. Install a new fuel filter. We have heard reports of repair costs ranging from $10,000 to $18,000.

Another concern is that the system operating pressures of the Bosch CP4 injector pump may result in aeration of the fuel within the pump, promoting metal-to-metal contact and accelerated wear, flooding the fuel system with metal particles.

Be prepared to address these issues with your customer when fraudulent claims are made regarding your services or the quality of the parts that you installed when performing maintenance on their vehicle. A defective fuel filter will not create and flood the fuel system with metal. Mechanic B was accurate in his diagnosis and that was lack of fuel lubricity resulted in the damage to the system.