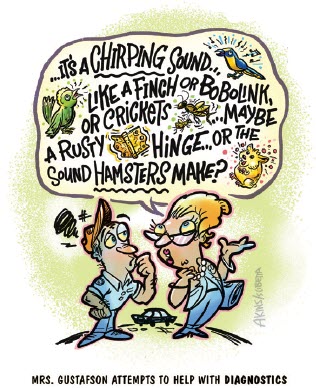 Active Fuel Management: It Can Pose Some Challenging Diagnostics

Customer complaints of chirping, ticking, squealing, or squeaking sounds accompanied with misfire codes stored may be the result of valve lifter or camshaft failures on vehicles equipped with Active Fuel Management (AFM), sometimes referred to as Displacement on Demand (DOD). Pinpointing the source of the noise can be a challenge for the technician and the repairs can be costly.

Diagnosing any engine-related noise can be a challenge even for the most experienced technician. Some noises can be identified and resolved, while others fall into the category of “it’s a normal characteristic.” At least that is the position of some vehicle manufacturers. For most, especially the vehicle owner, engine noises are not what they consider normal and that creates some challenges for the technician, especially when there is no cure for the complaint. Some engines are prone to make noises. For example, clicking, ticking, or knocking sounds on cold starts; a brief piston slap for 2-3 minutes following a cold start in cold weather is not detrimental to the life of the engine; fuel injector and fuel pump clicking/ticking noises are normal on vehicles equipped with Gasoline Direct Injection, as the system operates at extremely high fuel system pressures. It can be a challenge for the technician to sort through what is considered normal noises and those that need attention.

The AFM system has the ability to turn an 8 cylinder engine into a 4 cylinder for fuel efficiency during light load conditions. Special AFM valve lifters with locking
pins are controlled by oil pressure via a Valve Lifter Oil Manifold (VLOM), which incorporates four electrically controlled solenoids that direct pressurized oil to the AFM lifters when cylinder deactivation is commanded by the PCM and blocks the oil flow to the lifters to reactivate the canceled cylinders.

Camshaft and Lifter Failures…Valvetrain issues with the AFM system prompt complaints of chirping and squeaking noises accompanied by a Check Engine light and stored misfire codes. The symptoms may occur intermittently or consistently. These noises normally increase off-idle and occur at camshaft speed, which is half of the crankshaft speed. The symptoms may be the result of the following: 1) Worn camshaft lobe. 2) Valve leakage. 3) Sticking valve. 4) Broken valve spring. 5) Collapsed or stuck AFM lifter. 6) AFM lifter locking pin damage/ failure due to oil aeration. 7) Damaged lifter guides allowing valve lifter roller misalignment with a camshaft lobe.

Lifters stuck in the compressed position may be the result of cylinder activation during the improper position of the camshaft lobe. Activation should occur when the lifter is at the base of the camshaft lobe and not on the ramp or lobe peak. If the AFM lifter unlocks as soon as the engine is started, low compression will result in that cylinder and a misfire code stored. Collapsed or stuck AFM lifters due to contamination will result in the same. Contamination/sludge is a major concern, prompting some to rethink mileage service intervals.

A Visual Inspection…If diagnostic procedures fail to identify the source of the noise or misfire codes, a visual inspection of the camshaft and lifters may be necessary. During the inspection, it is not uncommon to identify a worn camshaft lobe, stuck or damaged AFM lifters. Consider the following: 1) Lifter rollers may encounter pitting or gouging with a crater-like appearance. 2) Flat spots on a lifter roller is an indication of lifter guide wear, allowing the lifter to rotate in the lifter bore and becoming misaligned with the camshaft lobe. Replace any lifter guide that encounters worn or damaged lifters or camshaft lobes. 3) The camshaft may encounter lobe wear due to lifter failure, which often requires removal of the camshaft for a visual inspection.

There is a small filter screen positioned in the VLOM beneath the oil pressure sensor that can affect AFM operation due to sludge build-up, thereby restricting oil flow. If you are not familiar with the filter, review Mighty Tech Tip 185 “Low Oil Pressure Message.” The vehicle owner’s part is maintaining the proper service interval to keep the engine free of deposits that can restrict oil flow through the VLOM and valve lifters.